“Give a Hoot”… the male Great Horned Owl

On Thursday, 01-28-21, I went out searching for owls.  When I go out I’m always looking for “Hoot” the female Great Horned Owl that I’ve photographed and taken video many times this past fall. The last time I saw her was on 12-25-20 in her favorite conifer tree where I’ve spent 3 hours with her.  When she woke up she started giving territorial calls back and forth to “Give a Hoot” her male friend. Until today I’ve only been able to get a couple quick photos of him when he was being mobbed by several crows on Monday, 01-18-21 and those photos weren’t the greatest.  “Give a Hoot” doesn’t let me get too close to him before he’s off flying even under normal conditions when I’ve come upon him.

Yesterday, 01-27-21, I found and photographed a Barred Owl that I’ve photographed in the past in a slightly different area since the last time I saw it on 01-15-21. I think it adjusted its area slightly because “Give a Hoot” was being mobbed in the exact area where I used to find this Barred Owl.

So today I brought my long lens and other camera gear in my backpack which I normally do and was going back out to find the Barred Owl. First I checked most of the new area, then headed to the area where I usually have found it. I didn’t find it in either place.

Since I was this far into the woods looking for owls, I was now about a 1/2 mile from another Barred Owl that I’ve recently found so I started walking that way.  I was about to make the “winter crossing” from one section of the woods I call Area A to another section, Area B , when I heard many crows making lots of noise in the direction of the woods where I used to normally find Hoot. I watched as about 20 crows flew overhead from that direction, but there were other crows still making noise. I’ve spent many hours in the woods looking to find out where “Hoot” is nesting, so I headed in that direction. When I got close to where I last heard the noise I saw a few more crows leave the area. The last time I heard crows making lots of noise in this particular area was when I briefly saw “Give a Hoot” on 01-13-21 after they were mobbing him. I wasn’t close to him before he flew off while I was watching him through my binoculars. There wasn’t any time to get my equipment out.

I walked slowly until I got in the area where I figured the noise from all the crows had come from when I spotted “Give a Hoot” in the distance.  I could see him, but he was hidden by many branches. I got out my camera and lens from my backpack, but he flew off. Since I had the camera set up I slowly walked in the direction he flew and after 15 minutes or so I saw him again. I was able to get a couple of long shots,  but he was still being blocked by some branches.

While watching him from a distance he flew off again, so I packed up my gear and placed it back in my backpack to go home. Before leaving I walked to the edge of the tree line in Area A looking with my binoculars over to Area B where “Give a Hoot” flew. I eventually spotted him and estimated I was probably 75 yards away.  I got out my camera/lens and tripod and stayed where I was at while I took some photos and video of him.  Last week-end I sat out a couple times after sunset until it was dark out listening for any sounds from “Hoot” or “Give a Hoot”. One of the places where I sat was about 50 yards from where I was now watching “Give a Hoot” tonight. It was probably around 4 pm when he flew to Area B and I knew sunset was shortly after 5 pm.

I figured I would stay out until it was dark out and see what he did…maybe I would see where he went or maybe hear “Hoot” make a call. Well, “Give a Hoot” flew back to my side of the woods at 1741 hrs, but to the general area where I first found him today. I’m not sure why he flew back to the side I was on, but there was a deer near him when he flew off or maybe he was going to visit “Hoot”. Although, if he was going to visit “Hoot” he certainly didn’t bring her a vole or bunny to eat.

I took several video clips of him tonight, but I haven’t gone through them yet.

I’ve been through this section of the woods many times and I have no clue where this two foot tall owl could nest. Although I believe she’s in this section somewhere based upon all my observations of the both of them. I think I’ve looked at every single tree up and down…

Here are some images of “Give a Hoot” from a long distance…the image where he was stretching was shot at ISO 16,000. 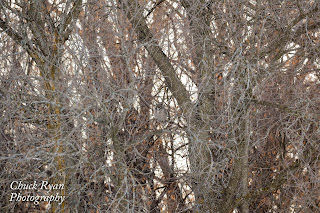 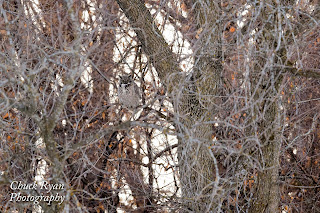 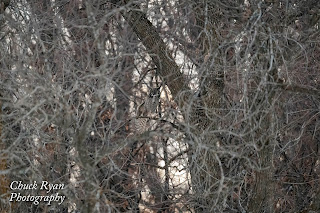