"Give a Hoot" ...the male Great Horned Owl

On Sunday, 01-17-21, I went back out looking for the female Great Horned Owl…”Hoot”.
I used to go out and find her in her territory on a regular basis. The last time I saw her and “Give a Hoot” her male friend was on Christmas Day. They were both giving territorial calls back and forth. Hoot must have called at least 50 times after she woke up. Today was the 11th day I’ve got out to look for her.

So I walked through the area looking for the Barred Owl, then for Hoot in her tree and her general area. Hoot and the Barred Owl territories are very close to each other and appear to overlap. When I didn’t find her I wanted to check out where “Give a Hoot” hangs out. Without describing the area in detail but as the owl flies its at least 100 to 200 yards away, but it's a much longer walk because its not a direct walk to the area and with the additional snow its not an easy walk.

I’ve seen Give a Hoot flying around in this area from a distance, but I haven’t actuallywalked the area. So today would be the first day.  I walked probably close to an hour when I heard a shriek followed by several barks not far from me. My guess it would be about 30 to 40 yards directly ahead of me. Right after that I heard several crows making lots of noise, but that direction didn’t line up with where I heard the owl call.

I’ve read that a shriek is given by a juvenile sometimes begging for food or a female defending her nest. The owl bark is a response to threats.

I continued to walk to the general area where I heard the owl call and sat on a log about 20 yards from a very large oak tree for about 10 minutes listening.

Once I was done listening I decided to walk in the direction of the crows I heard earlier. I walked about 10 yards toward the oak tree when I heard lots of noise. The sound of crunching snow. I stopped and watched two people on snowshoes maybe 100 yards away. They were downhill of me so they would have to look up to see me. They never saw me.

While standing there watching and listening about 10 yards from the oak tree out flew Give a Hoot from the other side of the tree. He didn’t fly far or at least that’s what I thought, but I needed to wait a couple more minutes before the people were out of sight before I could move and look.

I moved a few feet so I could get a better view with my binoculars, but I couldn’t see the owl.

Today, Monday, 01-18-21, I walked directly to Give a Hoots area. When I got to the area where I heard the shriek and barks yesterday I veered off and walked in the direction where I saw the crows flying and making lots of noise. The area had more conifers but after checking around the area I found nothing that would look like a nest and I didn’t find Hoot. I made my way back over to the large oak tree and again looked for any owl signs. After walking this area for a couple hours I was just about to go across an area that is open water in the summer to another area when I came across two other people on snowshoes and their dog. Not the same people as yesterday based upon their clothes., but Ive seen this couple in the past. I watched from a distance as they decided to come my way. I was going to go in another direction based upon where they were going. I went to the other side of this crossing and immediately  I heard a couple crows starting to make some noise followed my more crows now making a lot of noise. I wasn't very far away.

I got out my binoculars and could see the crows were mobbing a Great Horned Owl. It looked like Give a Hoot. Here's smaller and lighter in color compared to the female...Hoot. I got some photos to document the fact that this was the first time I’ve been able to photograph Give a Hoot. Give a Hoot flew from the tree after a couple minutes with the crows giving chase. As I walked back to grab my backpack I heard and saw the same two people on snowshoes again. They were on the other side of the crossing for only a couple minutes, but now they were back on the side I was on. I sat on a log and had a sandwich as I listened to them making lots of noise as they meandered through the woods. Once they were done which seemed forever I’m pretty sure there weren’t any owls left in this section of the woods.

Once they left the area I went to check to see if Hoot was in her conifer tree, but she wasn’t there. This was my 12th day looking for her..

The tree where Give a Hoot was being mobbed was the same area where I’ve been photographing the Barred Owl lately. Needless to say I didn’t see the Barred Owl today either.

I don’t know if the people on the snowshoes pushed Give a Hoot to the tree where the crows were mobbing him  or if he was already in the tree. Based upon my previous experiences with Give a Hoot he doesn’t sit tight when he hears any noise, so I'm thinking he was pushed. I’ve described him as the “Red Squirrel” of these two owls.

Here are a couple images of Give a Hoot.These were the best that I got but they were more for documenting to see if the owl was Give a Hoot or Hoot. I've never been able to photograph Give a Hoot in the past. 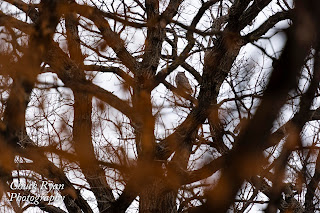 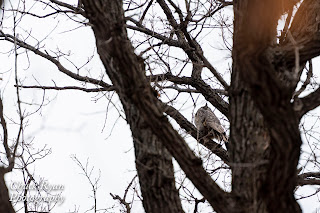 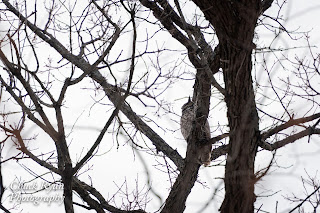 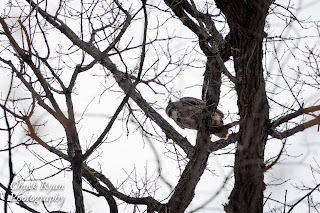 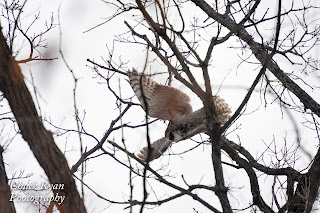