On Friday, 01-15-21, I decided to go out looking for the Barred Owl or the female Great Horned Owl that I haven’t seen since 12-25-20.
I usually go out with my camera, long lens, tripod with either the gimbal or lately with a fluid head all in a large backpack. Since the temperature was 35 degrees F when I left and the recent snow very wet and soft, I decided to go light because I would be sinking deeper in the snow. I took my camera with my 75-200 mm f/2.8 lens with the 1.4x teleconverter in a small backpack. There was also some on and off light snow and a light rain.
One other reason I was going light was because my plan was to do more walking to see if I could find the female GHO on a nest somewhere other than in her normal hangout.
While walking to the general area of the owls I noticed from a distance a large dead bird of some sort in the top of a 25 to 30 foot tree. When I got closer I glassed it and saw it was a dead Wild Turkey. I was just glad it wasn’t “Hoot” the Great Horned Owl I’ve been trying to find.
It didn’t take me long before I found the Barred Owl. Although, it was perched when I found it it was actively hunting. While taking photographs it appeared to zero in on some “moving food”. The owl flew from the tree it was in to another perch before throwing itself to the the ground. It was now face down with its wings spread out in the snow, then it lifted its head and looked back in my direction as if to say, well, are you going to help or just stand there looking at me. The owl then planted its face back in the snow before flying off.
When the owl flew up it looked like it had a vole or some other small rodent in its right foot. It landed in another tree where I couldn’t see it very well, but the owl didn’t stay long before it flew and landed on its next perch directly above my head. I looked up at it with the camera and took a photograph of it while it was looking down at me.
While watching the owl I saw it stand up and turn around on the branch and follow an eagle that flew above and slightly behind it. The owl followed the eagles direction for at least a minute before relaxing. All I can say that’s some hearing, because the owl certainly didn’t see the eagle where it was perched before turning completely around.
I took some more photos but decided to go look for the GHO, since the Barred Owl decided it was time for a nap.
I walked around for about an hour looking for the GHO, but I didn’t find her. I kept listening to what I initially thought was some dog constantly yelping, but when I was finally able to see onto the ice I saw a coyote making its distress yelp. I glassed the coyote in the distance as it walked and then saw it lay down briefly on the ice before getting back up and walking out of sight in the cattails.
Well, I decided to leave the woods the way I came in and found the Barred Owl still in the same tree that it was in when I left it an hour earlier. 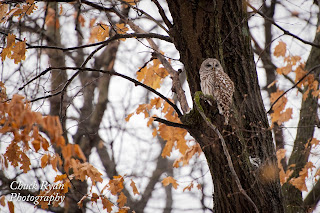 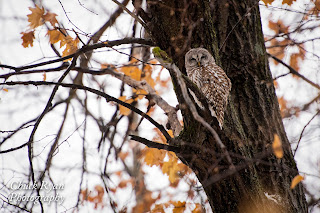 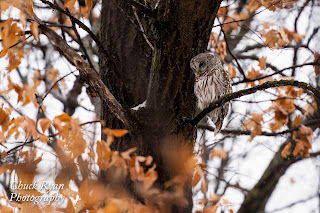 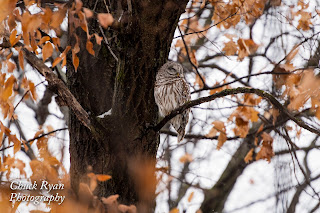 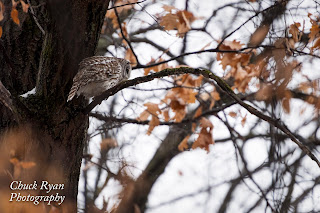 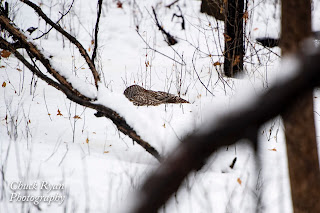 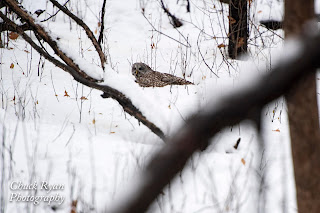 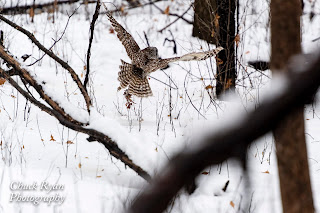 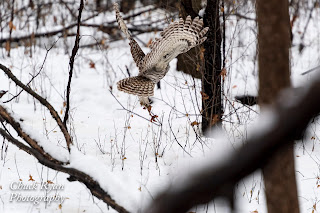 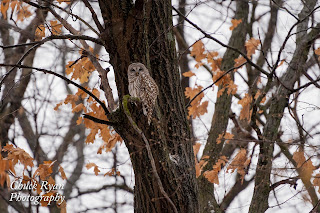 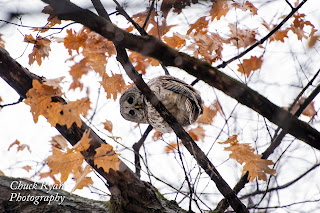 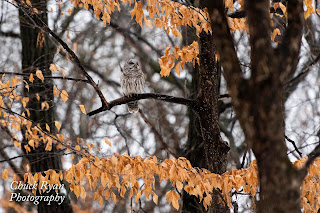 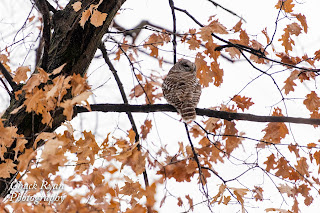 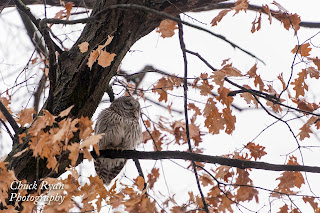