Here are some pictures and videos of some of my rides in November 2018. Some of the rides are from rides I led or attended with the Twin Cities Bicycling Club.

Catherine and I decided to change the sealant in our tires on our fat bikes....

On 11-09-18 Joe and I rode another version of my Another Friday All-Roads ride that ended up being 59 miles long.

On 11-11-18 Catherine and I took her dog, Griffin, fat biking up around the Coon Rapids Dam area.

On 11-14-18 Catherine, Paul, Joe and I started out riding my 57 mile, Milder Weather Wednesday, ride. Joe turned around after about an hour because his rear derailleur cable broke.

On 11-16-16 I rode around Elm Creek Park including a a couple mile of single track on my fat bike...

On 11-20-18, Joe, Paul, Catherine, Chuck and I rode a 58 mile ride I called Going Somewhere for Coffee. We took our break in Maple Plain at Blackwater Coffee ...

On 11-23-18, Joe led one of his Credit River Ramble rides (42 miles) from Lakeville, MN. We took our break in New Market at Firefly Coffee.


On 11-24-18, I led another version of my ride to Bru House coffee called Winter Bru Ride v2 that ended up being 42 miles long.
On 11-27-18, I led a ride that I called Balaclava Tuesday. As soon as I began riding I had issues with what I thought was my rear derailleur. It wasn't getting any better so I decided to change up the ride and make a stop at Maple Grove Cycle to see if they could figure it out. It was an issue with my rear Onyx freehub. Although, Travis took it apart and cleaned it I was still having issues for the rest of the ride. Lets say it was a very frustrating 48 mile ride.


I drove up Revolution Cycle and Ski in St. Cloud after fat biking to have my Onyx hub repaired. Mike made arrangements with Daniel of Onyx Racing to come over to his store to repair the hub. Daniel took it apart and replaced the bearings, but the key was to use the correct correct grease on the sprag clutch. It needs to be a special grease that goes down to -40 degrees F.

This summer I had one of the bearings replaced, but the special grease wasn't used on the sprag clutch when putting it back together.  What I find strange about what happen yesterday was I've been riding in just as cold weather and I hadn't had a problem. 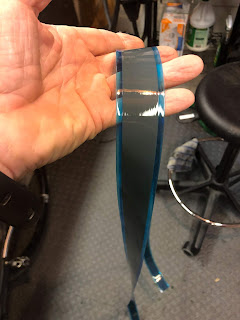 11-29-18...After fat bike riding I changed out my rear 45NRTH Gravdal studded tire with a new one. I've already had two flats in this short cold weather riding season. The studs have been pushing through the tire causing a very small hole in the tubes. This time I put some RhinoDillo tire liners in both tires to help prevent the studs from causing a flats. Last years winter season I also had 2 flats from the studs pushing through the tire.