Here are some images and videos of some of my bike rides done in October 2018. Some of them are rides that I led for the Twin Cities Bicycling Club and some other rides by other people.

On Monday, 10-01-18 I showed up in Hugo to do Bob Floyd's, Hugo Kruze ride. The weather wasn't looking that great, so Bob wasn't going to ride. I waited around to see if anyone else would show up, but when no one did I took off by myself. I looked at the radar and it looked like I would possibly miss the rain on this 52 mile ride so I didn't take my rain pants. My Garmin had an average temperature of 40 degrees for the ride with a low of 37.

I arrived in Lindstrom for a break just as it began to sprinkle.
I had a coffee and a breakfast sandwich while checking the radar. It was lightly raining but it wasn't showing on the radar. The forecast showed heavier rain in a couple hours around Hugo so I thought I better start riding.

No sooner than I got on my bike it started raining harder. I only went 2 to 3 miles before I stopped to put on a rain jacket. I checked the radar again and it still showed heavier rain in a couple hours. Well, it rained steadily for the next hour causing my legs and feet to become completely soaked. It was around 39 degrees and I have to admit pretty darn uncomfortable.  The rain pretty much stopped the last 45 minutes or so making the ride a little more comfortable.

On Saturday, 10-06-18, Catherine and I were going to do the Minnesota Randonneur's Hills of Wisconsin 200k bike ride. This was Beth's first randonneur ride and she decided to ride with us.

On Friday, I led my 71 mile Northwoods Moose Adventure ride up to Linstrom from Stilllwater, MN.

On Saturday, 10-13-18, several of us did another one of Bob Floyd's ride called Taylor Made Lindstrom Kruze. We rode 77 miles.


On Sunday, 10-14-18, I led my 51 mile ride called Bru House Coffee ride out of the Dunn Brothers in Minneapolis on Lake Street and the River Road.  This was the first day of the snow sticking to the vegetation.


On Wednesday, 10-24-18, I rode Catherine's 50 mile ride called Nana's Spin to Brake Bread. She had a good turn out for her ride around St. Paul and Minneapolis. 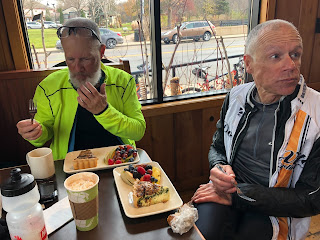 All these images were taken with my iPhone to document the rides.