Mia Borders... at The Green Parrot in Key West


On Saturday, 02-09-13, I started driving to Cape Coral, Florida which takes anywhere around 27 to 30 hours depending on the weather. I didn't return back to Minnesota until 03-03-13. One of the reasons I haven't posted anything on my blog for awhile.

While I was gone I posted some images from my iPhone to my personal Facebook wall...Charles W. Ryan II

After spending a few days in Cape Coral I packed up and headed to The Keys on Thursday, 02-14-13. To be exact...Key Colony Beach near Marathon which is about half way between Key Largo and Key West.

On Friday, 02-15-13, I headed to Key West for the day. Mia was playing a couple shows that day at The Green Parrot, if I recall correctly. I wanted to see her so I was hoping to make the afternoon show.

It was a rainy day...after parking the Suburban close to the cemetery I walked around it and located a couple grave sites I wanted to see. Then slowly making my way around Key West where I think I was about a half an early arriving at The Green Parrot.

The stage at The Green Parrot was very small and there is a place to put your drinks on directly in front of the stage so I knew I didn't want to stand in front. I started off standing directly off to the side near a near post/pillar where I would be out of the way. Once in place I wasn't going to be able to move around to get the shot...

Once I had enough shots from the one side I went around to the other side. Right by the lady's room door. I had to be careful not to get whacked by the door when the lady's came out...I think I got whacked only once, but had a couple more close calls. :)

Unfortunately, I couldn't get a clear shot of the drummer so no images of him :( 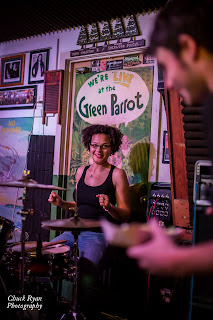 Mia having some fun before the start... 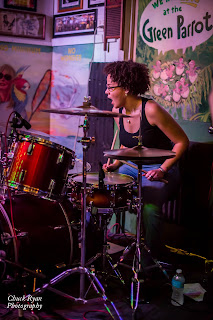 Mia still having fun some fun :) 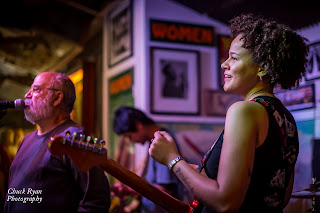 Mia being introduced before playing... 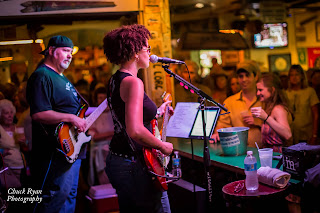 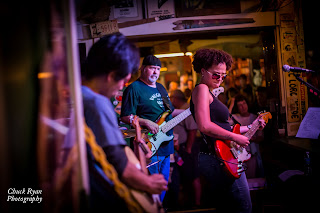