I'm back from Woodland Caribou...early... 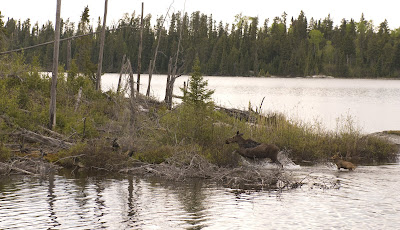 I’m back from my Woodland Caribou Solo canoe trip. Overall, it was a very good trip, but unfortunately I cut the trip short. This was planned as a 10 day trip that ended up being six days.

I cut off three complete days of travel that would have taken me further west and I combined two days of travel into one. I made the decision to alter my route after traveling three days when my right ankle became very sore.

I think it was day two and for sure on day three I felt my ankle bone on the inside sore, but I thought it was from the ankle bone rubbing against the open latch to my Pelican case for my camera gear. For traveling during the day I wear NRS boots that are neoprene on the inside and a thin stiffer rubber material on the upper part to give support. These are very good boots for wet footers.

On day three I encountered some very steep portages and the outside of my ankles had pain with every step I took. Since I hadn’t done anything obvious to the ankle I was getting concerned that something was wrong with the tendon. When I got to camp I changed into my Danner boots and the pain wasn’t there when I walked. Now I was thinking that my NRS boots were rubbing on the tendon.

My last two portages on day three were through a burn area. The second to the last portage was a 550 meter portage that doesn’t sound like much but I needed to bush whack over burned over bedrock with downed burned trees then through a low area with more down trees without any obvious portage. I was concerned that if my ankle got worst I had more of the same type portages coming up in the next couple days. On day six there were some longer portages and the longest was 850 meters through the burn. My thought was if I continue past this point where I was and went further to the NW I wouldn’t be able to turn around and I would need to cross the 850 portage. Would this be a bush whack, too?

It wasn’t until I put my NRS boots on in the morning of day four that I made up my mind. As soon as I put my right boot on I could feel the pain. I was camped on Welkin Lake. I saw that if I back track a little that all I had to do was cross a 300 meter portage to take me to Wrist Lake. I checked my maps and this portage was just outside the burn area so I hoped the travel would be easier than through the burn area with down trees. There was no option. I wasn’t going to completely back track across that 550 meter portage I experienced yesterday and if I continued to the NW I could potentially cause me more problems if the ankle got worst.

On day 4 I used an Ace bandage around my ankle and a little tape to try to keep some padding between my ankle since I thought it was the boot rubbing on the tendon causing the problems. Day 5 I used some foam that I was using to protect my Really Right Stuff BH-40 ball head on my tripod. I ended up cutting the foam and putting it around my ankle to keep the pressure off the pain area. This seemed to work but it started to get sore in another spot.

The only problem with having an ankle problem is that it hurt with every step I took with my right foot. It could have been worst if both ankles were bothering me.

I sprained my right ankle on the Wabakimi trip last year. I think this was what was causing me my problems on this trip. It doesn’t hurt much now when I walk but I can feel some pain since the Ibuprofen has stopped working. When I palpate the tendon on the tendon it’s still sore. Now I think it’s a tendon problem and not my NRS boot.

Heading up to Red Lake I saw several bears, some deer, moose and other wildlife.

I took a lot of photos and I plan to write a report about this trip, but it will be a while before I post it. I’ll probably post it in its own blog. 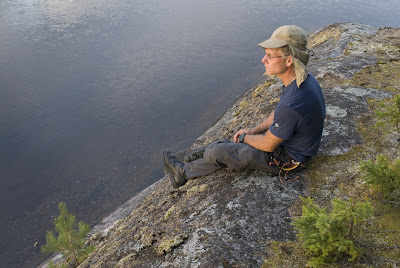 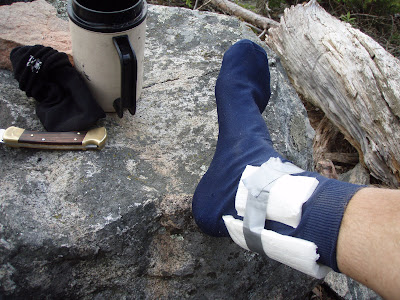