I was sitting back thinking...

Well, I needed to go to Dallas, Texas for a few days last week. Where I needed to go weren't the nicest areas so my first impression of Dallas wasn’t much. I was glad to come home. 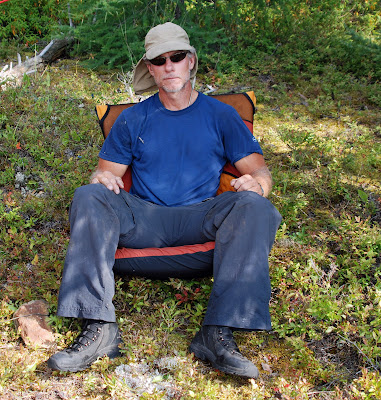 I’ve been sitting back thinking about ………….Wabakimi!

Over the holiday I’ve been doing some thinking for next season. Here’s what I came up with for sure…that I'm not sure!

I haven’t decided if I’m going to race canoes next year, or get back into some log building or what wilderness trips I will take. I will do a considerable amount of paddling even if I don’t race.

I do plan to work on my food plot on my property that I neglected this year. Since I missed most of the fall season due to work I hope to get out and do some bow hunting for both bear and deer next fall. I also rifle hunt with my father each year.

This week end I got out my overview map of Wabakimi Provincial Park and looked at it. I marked down some additional 13 topo maps I need to buy for some further planning. I know some of the guys I went to Wabakimi with last year want to go back a little further north.

They want to either paddle the Misehkow River or the Albany River. One of the guys wants to go in July and the other one wants to go in August. Right now, for me, my vote would be in August just in case I decide to do the AuSable Canoe Marathon again.

Thinking out loud….train ride out of Armstrong to Savant, ride to put in some where off 599, paddle north, cut over to the Misehkow, hit the Albany, fly out of Fort Hope.

If there is a big loop I would even consider doing it in a solo canoe. Still thinking….

I would like to go for a longer time, possibly 21 days or so. I think I want to leave the upper part of the Albany beginning at Osnaburgh Lake then paddle to James Bay for another day.

Here is some further information I reviewed this week-end.

Canoeing Ontario's Rivers [Import] [Paperback] by Reid, Ron; Grand, Janet- I ordered this book from Amazon this week-end for .50 plus shipping.

I also ordered the following books to add to my library of paddling further north.

Well, time to sit back again and do some more thinking...before these books arrive!!!

hello chuck ryan, i complement you on your effort and report on wHITEWATER LAKE[BEST ISLAND]AND WENDELL BECKWITH.he was my uncle's
best friend. i was there quite a few times in the 60's it doesn't seem the same of course. i'm writing a book to set the record straight on wendell. your effort and report were very vivid and took me back to my youth. i camped many times in minnesota,ontario,wisconsin, lake of the woods and much more. i grew up on the wisconsin river near boscobel, wisconsin. thanks for your report it was great. yours in nature. mike camp