On Saturday, 10-29-17, Rob Welsh, Gene Kartavtsev and I rode my Osceola 2 Luck 123k RUSA Populaire route. This ride was through the Minnesota Randonneurs and done as an Outreach ride with the Twin Cities Bicycling Club.

The day before was the first snow of the season. I wasn't sure how the road conditions were going to be on Saturday, so I took off my 38mm gravel tires on my Seven Evergreen and replaced them with some 38mm 45NRTH Gravdal studded tires. I think there are around 254 studs. I got up Saturday morning and the roads around my house appeared that I could ride with a different tire. I changed out the tires to some 45NRTH Xerxes studded tires. These have around 140 studs per tire.

The ride would start in Osceola, WI and go a little further north to Luck, WI.

I got to Oakey Park in Osceola and waited for Rob and who ever else showed up. Well, Gene was the only other person to show up to ride.

The temperature at the start of the ride was 32 degrees, NW winds and the roads were basically clear of snow. I could have put on other tires that weren't studded, but this was going to be my first "winter" ride since the 2016 season. On 2-23-16 I crashed while riding my Evergreen with the Xerxes tires breaking my clavicle and damaging my scapula and ribs. Then on 11-07-16 I had a Total Knee Replacement on my right knee. I was glad to see that the roads were clear. 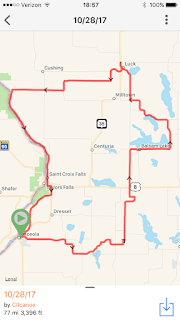 The was the actual route of the ride. 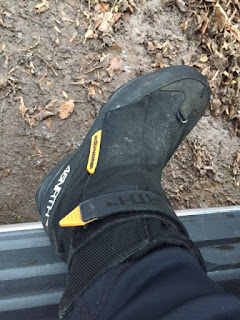 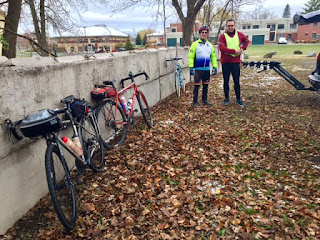 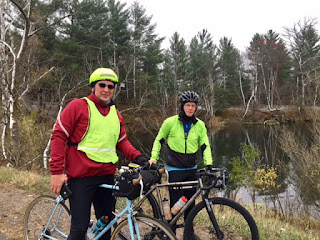 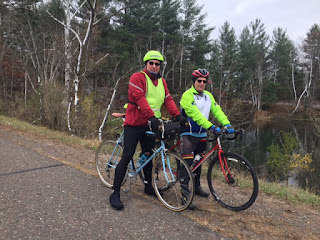 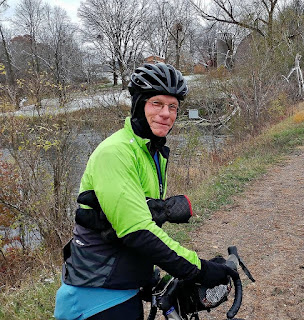 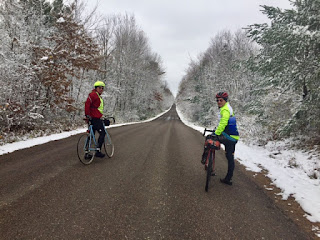 Gene (L) ,  Rob (R) The closer we got to luck, WI there was more snow in the woods and on the trees. 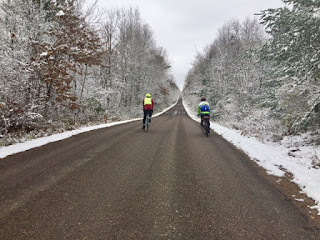 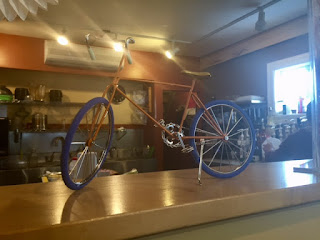 We stopped at the Cafe Wren in Luck, WI for a hot meal and some coffee! 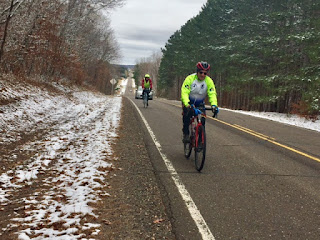 It was a little more work riding the entire route with some studded tires, but it still was a good day for a bike ride. The snow added a nice touch to this ride. Thanks to Rob and Gene for a great ride.