The following info was posted on Sena Ehrhardt Band's Facebook page. I took the photo that was associated with this press release from ARM Entertainment at Wilebski's Blues Saloon on Friday, 03-15-13. The image originally posted had my smaller watermark...I've posted the image here with the larger watermark....

"Never in the history of my booking career has the merging of two solo blues stars had such an anticipated excitement on what lies immediately ahead. Uprising star and Blind Pig Recording artist, Sena Ehrhardt has secured Cole Allen as guitar slinging bluesman to share the stage with she and her father, veteran axe-man Ed Ehrhardt, Steve Hansen on bass and Tim Hasler on drums in support of her new sophomore release, “All In”. The disc is currently receiving worldwide press and impacting airplay. Just in time to embark a solo summer tour 2013 in support of the Jim Gaines produced project, the disc is true to life form on stage with fullness of multiple guitar tracks on the release thanks to the new addition. Simultaneously, Cole has also just released a new solo self-entitled disc on Playground International. 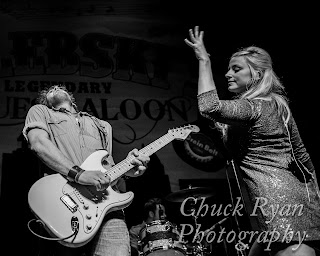 To recap or bring you up to speed, Sena has appeared on Cole’s debut video, “Let Me Know” as well as sharing tracks on a feature power ballad duet entitled “Too Late to Ask” on Cole’s debut which comes out June 4 th . In response, Cole has credits on Sena’s new video release, “Buried Alive”. Now, they will share magic together here, there and everywhere. Stay tuned for what’s next, solos, duos, on Sena’s stage, Cole’s stage and soon on a stage in your city! Sena Ehrhardt w/special guest appearance Cole Allen is worth checking out. They are going places. I just hope I can keep up! But don’t trust me, if you don’t get it, then you ain’t got the blues. Roger Anderson / VP - ARM Entertainment"