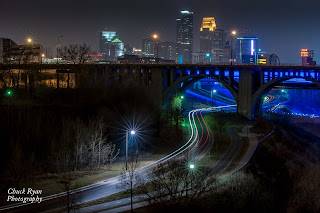 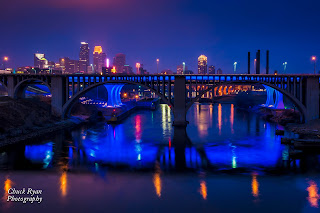 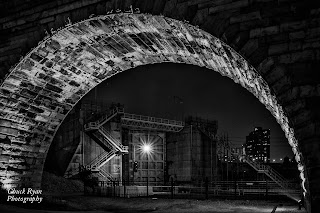 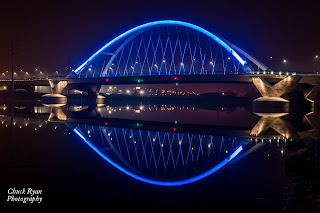 On Friday, 11-30-12, I was thinking about going out to do some more night photography on Saturday.  It looked like it might be a decent day to go especially for the first day of December. The temperature was going to be in the upper 40’s, but there was also a possibility of rain during the time I would be out. I called a fellow photographer friend, Bill Houlton, on Friday evening and told him that I was planning to go out on Saturday. I wondered if he wanted to go. He didn’t have any plans so he said he would.

I spoke to Bill in the afternoon on Saturday and asked him to meet me at my studio in Minneapolis at 3:30 PM. I told me I had about three different locations where we could go. The first location I didn’t know exactly which side of the river I would have to park so we needed to do some scouting.

I met Bill at the studio. We decided to leave his vehicle there so he threw his camera gear in my Suburban. Off we headed to the first location. The walk bridge  over the Mississippi River downstream of 35W. We got there probably 45 minutes before sunset which was around 4:32 PM...as I recall. Now we just waited and I took some un-interesting images until it was showtime. I shot from a few different angles before deciding to go to our second location. We both put our cameras away in our camera bags and started walking back to my Suburban. We didn’t get far before needing to get the cameras out for some more shots from the bridge. Ok...now I just left my camera attached to my ballhead/tripod with it over my shoulder. Bill did the same. We stopped one more place to take some shots near where I parked the Suburban. We got a few shots, then threw our stuff inside the Suburban... ready to go to South Minneapolis.

I got in and turned the key....just the sound of the starter trying to go....oh, oh, that’s not good. I checked and I hadn’t left anything on or plugged in. I carry jumper cables and a battery charger, but I took out my long extension cord and left it at home. I was probably in a neighborhood where I probably wouldn’t be looked upon too kindly just flagging down people as they go by, but that’s what I had to do.

A few cars came near us, but not close enough for me to wave them down. Then I got the jumper cables out and looped then around my neck...sure.. that was going to attract them. I saw a car pull out of an underground garage so I waved at them as I walked toward the car. Nope, the lady wouldn’t even look at me, except maybe out of the corner of her eye. :)  Fortunately, it was only about 5 minutes before another car came driving our way. The female driver rolled down her window when I waved at her...there was another lady in the passenger seat. I explained my situation to her and she said...no problem. She maneuvered her car close to mine. The jumper cables were hooked up and the Suburban started.

I went over to the driver and said “thank you” and tried to give her some money, but she wouldn’t accept it. Well, this little inconvenience didn’t delay us very long at all.

We decided to drive back to the studio where we leave would my vehicle and take Bill’s vehicle for the rest of the evening.

Bill and I drove to the foot bridge over 35W at 24th Avenue. I could see what looked like two or three people who appeared to be just hanging out on the bridge. I asked Bill to drive around the block again. We parked about a block south of the bridge. The people were still in the same spot on the bridge. I told Bill to grab his stuff and we would just walk closer to see if it appeared safe to go up on the bridge. While we were walking up I saw one person run from the east end of the bridge to the west out of sight. It was only seconds and this same person ran back to the other person. I still had no idea what was going on.  We got a little closer and I saw what looked like the outline of a tripod very low to the ground with two people near it. We now got a little closer and it definitely was a tripod, but their camera was facing to the west the length of the walkway and not toward downtown Minneapolis.

There were about four or five holes cut in the chain-link fence the length of the bridge over 35W so we were able to get an unobstructed view with our cameras for shots of the Minneapolis skyline. The two guys left after we there for a couple minutes setting up. Bill and I shot from several of the openings toward downtown Minneapolis. There was very little foot traffic going across the bridge while we were there...to my surprise, but it was probably due to the cooler weather.

Next Bill and I went to the Stone Arch Bridge and parked. It was 8:20 PM. The reason I know was that Bill wondered how much time he should put on the meter. I looked at my watch and saw the time. I figured a couple hours would be good enough. We actually didn’t cover too much territory. We were there maybe about a half an hour before another photographer walked by who I had previously met at the Minnesota Renaissance Festival. He and his wife were out photographing the area, too.

After a couple hours Bill was ready to leave so we decided to call it an evening. We went back to the parking lot. We were putting our gear in the back of Bill’s vehicle when a car pulled up and parked right next to us. A younger guy gets out and starts talking to us. About 20 seconds later two girls get out of the car and one of them hands the guy a camera. She said she didn’t know anything about  cameras. The guy said she was his wife although I don’t know for sure. They just came from the Lowry Bridge. He showed us a few of his images on the back of his camera. I told Bill we needed to go there since the river was so flat which was giving off some nice reflections.

It was about 10:30 pm when we got to the Bridge. We parked and Bill followed me to an area down the river bank through the brush to an area downstream of the bridge. We set up our tripods and started to get some shots of the bridge with the nice reflections in the water. I walked a short distance away from my tripod when I heard some rustling with what sounded like paper or a plastic material. I looked up and a short distance up the bank I saw a person who had made himself a little sleeping area. I know it wasn’t going to be too comfortable with the cooler temperature and all the moisture in the air. The guy was probably wondering why all these people were coming at all times of the night to photograph the bridge. I went back to Bill and whispered that there was a person up on the bank so that he was aware. Bill later told me he only heard me say a person and he assumed it was another photographer. We took some photos there before heading to the top of the bridge. Since I already had several shots of the bridge from a couple weeks ago I just waited for Bill before we drove to an area upstream of the bridge. There was a lot of moisture in the air so the Minneapolis skyline wasn’t too clear. I got my last shots around 11:30 pm.

Bill drove me back to the studio which is only a few blocks from the Lowry Bridge. You guessed it my battery was dead and I needed another jump so I could get home. On Monday, 12-03-12, I got a new battery so I’m good to go on the next night time outing.
I have a link to more night time shots from my last two outings in Minneapolis right after the next four posted images. 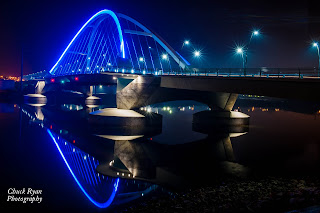 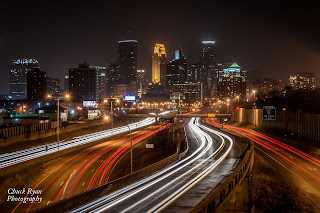 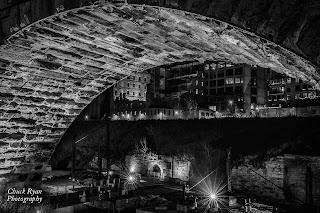 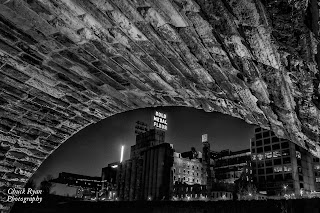