On Wednesday, 06-13-12, the Brooklyn Park Police Department held their 4th Annual Cops 'N Kids Fishing Tournament.
The following is a short article about the event by KSTP.

Brooklyn Park Officers Fish for Friends of the Force

150 Brooklyn Park kids will cast a line into the lake Tuesday, hoping to catch the big one.  Brooklyn Park police officers will be there, too, hoping to catch some new friends.
The 4th annual Cops-n-Kids Fishing Tournament will be held at Champlin Mill Pond.  City spokesperson Mary Tan describes the kids as "the city's neediest."
"It's all part of an effort to show at-risk children between the ages of 7 and 12 that police officers not only protect and serve, but love to fish," said Tan.  "The tournament is also an effort to show children the benefits of good choices, to help deter crime in the future."
Officers will teach the children the basics of fishing.  The kids will be using their own gear, donated by Cabela's.
"The event was the brainstorm of Inspector Mark Bruley, who is the police department's SWAT commander and an avid, award winning fisherman," said Tan.  "He also loves kids and wants children to know police officers are their friends."
Each child will also receive a prize, bought with money donated by the Target Corporation.
Created: 06/11/2012 4:56 PM KSTP.com
By: Mike Maybay

This was the second year that I photographed the event. 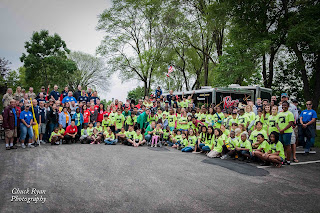