How I met Jimmy in Key West

You were probably thinking how I met Jimmy Buffett in Key West, but this was another Jimmy.

My father has a place in Key Colony Beach near Marathon in the Florida Keys. I go to the keys just about every year. When I’m down there I usually spend one day down in Key West and I usually go to the Sunset Celebration at Mallory Square.

On March 1, 2008 I decided to drive down to Key West. I drove down, late morning, after I got done working out at the Marathon Fitness Center. I spent the day walking around taking photos. Then an hour or so before the sun sets people begin walking down Duvall Street and elsewhere to the seaport at Mallory Square to take in the Sunset Celebration.

Well, it was a hot day, mid afternoon, and I had been walking around for several hours. I was over in the Historic Seaport near a tall statute / monument. There was only a small area on the opposite side from where the sun was shining that had any shade. Of course, there was someone else sitting there.

I decided to sit on the steps of this monument in the sun to give my legs a rest. I wasn’t there one minute when a guy comes up and sits down right next to me. He asked me if I could help him. Of course, I’m very suspicious. Some people may know what I do for a living so obviously I immediately think something is up.

I’m sitting there looking like a typical tourist with a large camera hanging around my neck and this person wants me to help him out. I must have looked like the helping type, but maybe in his eyes I looked like a victim.

It’s daylight out with lots of other tourist around so I ask my new friend, How can I help him? He says, could I go with him a few blocks away to pick up a mattress. I asked him what is going to do with the mattress and he tells me he’s going to put it on his dingy. I ask him, What’s the name of your dingy? Lucille, he replied! Where is your dingy? He twisted around and pointed in the opposite direction where we were seated and says, over there, tied up. I can’t see it, but he’s pointing toward the water.

I take the last sip of my coffee when I accidentally dropped the cup. He bents over in a hurry, grabs the cup, then runs over to the trash can and throws it away for me.

I’m still thinking something is up, but I figure I’ll go only on the streets and sidewalks. No way was I going off the beaten track. If you have never been to Key West there is a lot of dense vegetation and trees growing everywhere. I’m thinking he still wants to jack me, but I figure I can handle myself. If he pulled some type of weapon, then I would have to deal with that at the time.

Anyways, he tells me his name is Jimmy and I tell him mine. He told me he used to live in Ohio. I don’t remember where exactly. We make some more small talk as we made our way in the residential area next to the marina. He tells me there is a mattress placed outside of a residence that he wanted. I told him I wasn’t going to help him commit any crime. Oh, no, he says. It’s been put out near the road to be picked up by the trash guy. People do that all the time around here.

It was only mid afternoon so the streets and sidewalks weren’t crazy with cars or people. We made it to the last corner when I looked up the street where I saw a mattress leaning up against a tall wooden fence next to the sidewalk.

We walk over to the mattress. He again, reassures me that we can take it. I explain to Jimmy how I think we need to get this mattress back to the water front. We both grab an end and I try to match his steps, but we definitely aren’t walking in unison. We got to the first corner when Jimmy had to put his end down. He’s winded! Not good, we have a ways to go. 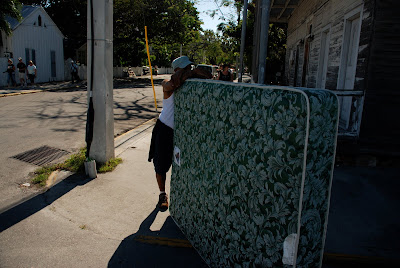 My next suggestion was to raise the mattress over our heads where we could use ours hands for balance and put some of the weight of the mattress on the top of our heads. It would be easier to walk.

Jimmy got it over his head and he’s in the lead. Off we go. He’s still pretty shaky walking, then all of a sudden Jimmy lost control of the mattress. The mattress is moving in an arc to the left while Jimmy is circling underneath it. I don’t know how he did it ,but he didn’t lose complete control of it, but now he’s behind me. Well, I think we better rest up after that.

I remember walking past several people as they starred at us while occasionally having to say, excuse us.. There was one lady who gave us the look as to say that she has never seen anything as disgusting as us. I just smiled at her.

We made it to the boardwalk around the marina. It’s only a few feet wide and we were taking up most of it. We now had to constantly say, excuse us. There were more stares.

We got to where Jimmy said his dingy was tied up. I look down and saw two small boats, one of which he said was his. He grabs the line to his and pulls it to some steps. Of course there are only a couple steps and they don’t go all the way to the water. 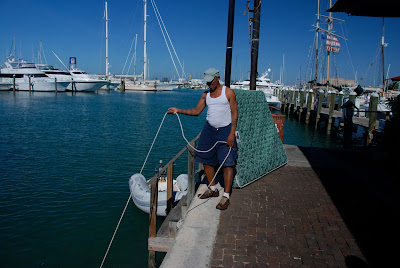 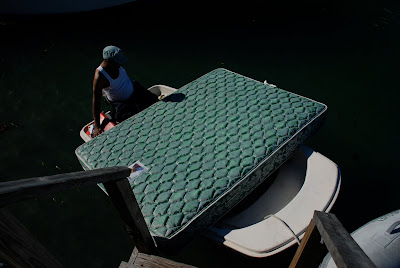 Jimmy offered me a ride out to his boat. He told me I could get some nice photographs of the sunset. I said, thanks, but no thanks!

Jimmy started his outboard engine and off he went. He leaned back on the mattress as the dingy kept going forward. He got back up and saluted me as the dingy headed right for some very expensive boats. Jimmy realized at the last second he was off course and straighten his dingy out just before crashing into one of the boats. 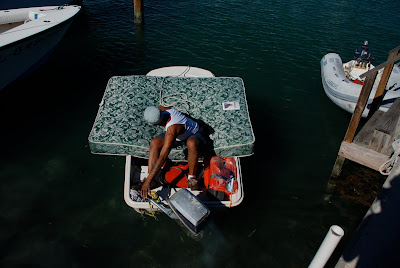 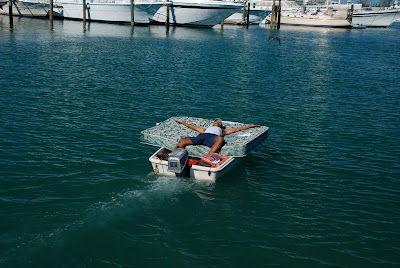 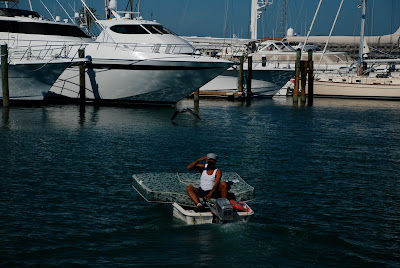 I got distracted for a minute or so, but I got one last photo of Jimmy before he made a left turn out of the marina. 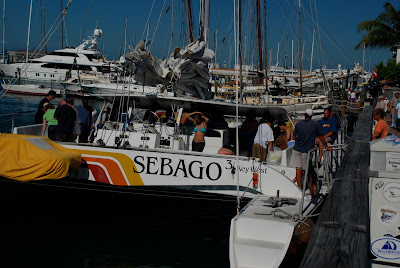 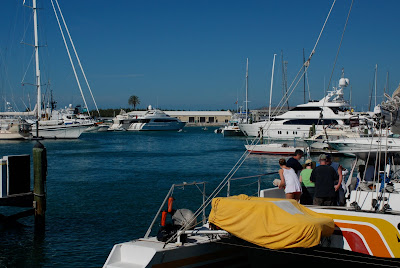 Chuck
Posted by CIIcanoe at 1:15 PM