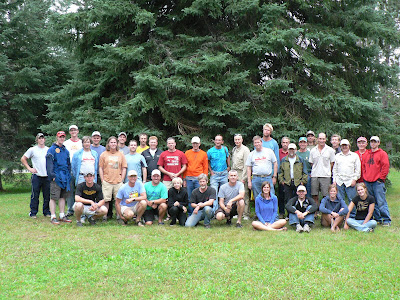 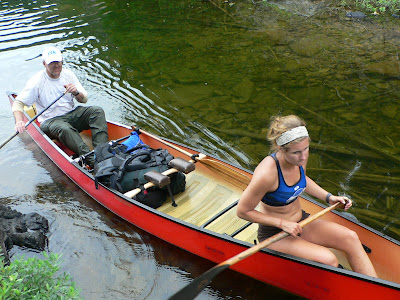 Robin Reilly and his daughter, Morgan 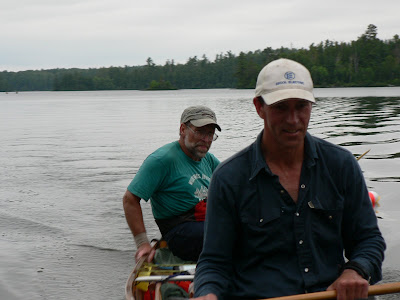 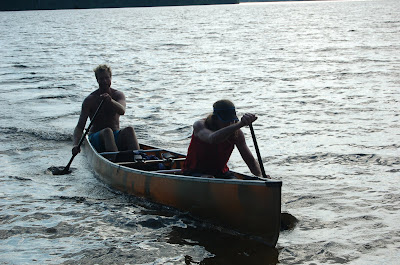 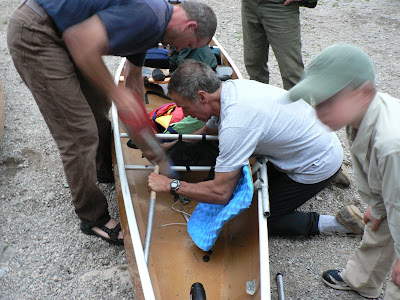 Volunteer John Pierce helping Steve Park repair his seat at the half way check point. The seat broke 3 hours into the race. 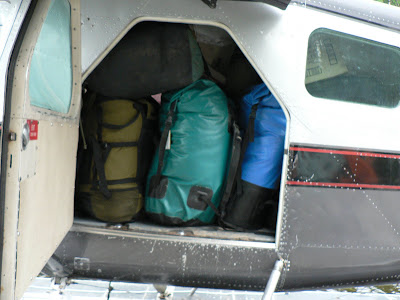 Tents and sleeping bags were flown to the south end half way point (Prairie Portage) via and compliments of Sapawe Air.

The following photos were posted on 08-11-09 when I originally posted this information.

I received some photos of the race that was held on August 8th & 9th from Chris Stromberg. 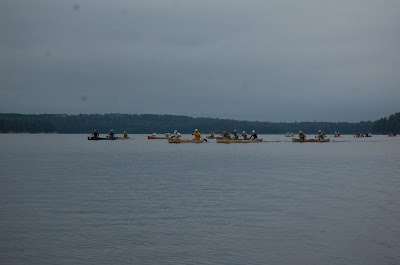 The above photo was taken on August 8th on French Lake after the 6am start.

Holly Armstrong and Branwyn Hughes with the past winner in 1963 Joe Meany. This was at the end of the two day race.

I met both Holly and Chris in 2007 on the Darkwater (Darky River) when they were clearing portages and checking permits. I wrote about my contact with them on my solo trip report, Quetico's Trees, Rocks and Water: A Solo Journey. You can find a link on the right side of this page.

Holly Armstrong "The Warden" has alittle bit about her written on page 37 in the Summer/ Fall 2009 issue of Canoeroots . You'll have to have the hard copy to read about her.
Tim Triebold (left, stern), Al Rudquist (left, bow) and Kate Ellis (right, stern). This was at the half way point to Prairie Portage. 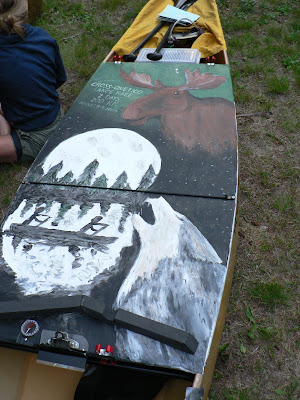 Kjell Peterson's cover on his canoe. Kjell was racing with Joe Manns and they took first place. Joe is Al's brother-in-law.

I understand Al Rudquist fell and sustained a rib injury during the race. He still continued on even with the painful injury and finished the race.

Chris told me that he felt the race was a great success and likely the best centennial event that they hosted this year.

I'm sorry I miss this one! I would have liked to have been competing instead of on-call at work.

I posted this earlier in the year!

“The legend lives on from the old racers on down, of the big race they called Atikokan-to-Ely. The race it was said wasn’t worth too much bread, and the weather could often be gloomy.”
Gordon Lightfoot aside, the Atikokan-to-Ely marathon canoe race is back! This legendary race took place in the 60’s and attracted some of the best paddlers in the world for the three consecutive years that it was held. Though the race itself has not taken place for almost 50 years the stories and rivalries from this race live on, giving some indication of the energy and emotion generated by the event.

Before getting into the details of what will be happening in Quetico Park regarding a centennial marathon canoe race this summer, a brief history of the event is in order. The Atikokan-Ely race was put on by the Atikokan and Ely chambers of commerce from 1962-64 in order to boost the profile of their respective communities and to draw attention to the paddling mecca that is Quetico Park and the BWCA of Superior National Forest. The first year that it was held it was won by two of the best known marathon paddlers of all time, Gene Jensen, a world-renowned canoe designer and inventor of the bent-shaft paddle, and Irvin “Buzz” Peterson, both from Minneapolis, MN. In 1963, the race was won by a local Ely man, Don Beland, and Ralph Sawyer, of the world-renowned Sawyer canoes. The third and final year of the race it was won by two Atikokanites. Eugene “Bonhomme” Tetreault and Joe “Sauvage” Meany created quite a controversy in their victory by cutting the two portages that now bear their nicknames. Not only did the team cut the new portages, but they cut false trails off the portages that would mislead the teams who hadn’t been down the trails before.

Nevertheless, Meany and Tetreault won the last of the Atikokan to Ely races and their reputation in canoe racing in the area was secured. To this day, their names are synonymous with canoe racing in northern Ontario.

The year 2009 marks Quetico Park’s 100th birthday and, as such, the park is putting on events celebrating its heritage. The cross-Quetico marathon canoe race is one of these events. The event will begin at French Lake and the turnaround point will be Prairie Portage, on Basswood Lake. The paddlers are free to take any route that they wish to accomplish this journey of roughly 95 kilometres each way. There will be a mandatory overnight stop at Prairie Portage where the racers will be fed and accommodated in tents. They will start off again early in the morning to finish back at French Lake late that same day. The race, in the true tradition of marathon-style racing, will be a grueling endurance contest controlled as much by the elements of the Quetico wilderness as by the racers themselves.

The return of the race across Quetico should offer serious paddlers the opportunity to test their mettle against some extremely competitive and talented paddlers. In addition, this race should encompass the true meaning behind celebrating the 100th anniversary of Quetico Park. The chance to race the same route as former greats such as Jensen, Sawyer and Meany in such a unique environment will rekindle the spirit of adventure, competition and camaraderie that was present almost 50 years ago in the Quetico-Superior area. While the technology that today’s paddlers use has changed drastically over the last 50 years, the lakes and portages and wilderness environment have remained unchanged. The rock cliffs and boulder strewn shorelines of Quetico that were navigated first by the First Nations people, the Voyageurs, and then by Meany and company will be the same places that modern day racers will have the chance to navigate through. No doubt that many teams nearing the end of the journey will have become so tired that, if they listen closely enough, the sound of Buzz Petersen and Jean Jensen’s hut cadence will be barely audible on the evening breeze, rapidly slipping up into their wake, preparing to blow past them.
Posted by CIIcanoe at 8:06 PM